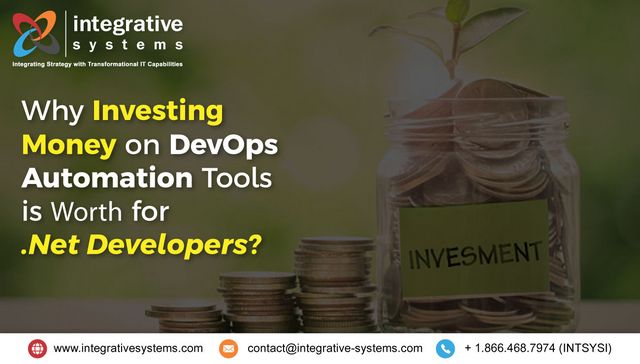 In a digitized business environment, the software world has come a long way. Since then, organizations have more coding and data storing options, and that is too automated. This blog has discussed some tools that dot net developers and ASP.NET software services providers should know about.

Also, it’s not enough to code a project – as it’s necessary to do it continuously. Continuous Integration or Continuous Deployment (CI/CD) is typically done in collaboration with the framework on which your undertaking source code exists and, on the server, where your application resides. In case you are working on the cloud-based model, without any doubt, it would be Microsoft Azure or Amazon Web Service (AWS). Also, you could opt to host on a server of your own or data center within your organization’s control. However, setting up an automated method to deal with new functionalities, bugs, and even to manage database changes is beneficial for organizations. Moreover, the implementation of computerized tools for code quality analysis, database versioning, and data comparison can significantly impact the way organizations process their day-to-day tasks.

Look at the tools below that every .net development company should know about. These tools can make your life better:

The most recent offering from Microsoft is the completely synchronized Azure DevOps, Azure Pipelines. It can be used with lots of team options, and it connects easily with existing projects. Azure Pipelines works flawlessly with containerization like Kubernetes, and it functions well for a serverless alternative, can be deployed quickly with Azure Web Apps and complex VMs. It is the best alternative to make the life of dot net developers smooth. Azure DevOps services permit you one free CI/CD objective utilizing an Azure Repo or GitHub repo. And price scales from that point depending upon the number of pipelines or licenses you need.

Jenkins is a famous open-source CI/CD tool supporting various programming languages (C#, Java) and applications. For a .net development company utilizing Jenkins as its build server, that is one of the easiest things for organizational arrangement, too, with its MSBuild module. And it’s not difficult to see which formed set of structures failed and will run the contents you need. Moreover, when chipping away with multiple tasks in various systems, Jenkins is the best way to integrate them. It gets along with everything, like with Azure and AWS, to archives like Bitbucket and GitHub. And the best thing is – it’s free of cost.

MSBuild Plugin is a Java app that can run on any operating system. You need to download and install it over a server.

Octopus Deploy is a finely tuned orchestrator for the developer pipeline. It works cyclically with the existing server and deals with the deployment and release of data between different frameworks.

This tool excels in various fields of deployment and integration. It works with self-facilitated applications on your worker. This is chargeable and can be used by paying monthly charges or opting for a yearly option.

Most probably, this is one of the best headache-reducing tools available in the market for SQL databases. Redgate has developed this tool to assist ASP.NET developers with data scenarios that pop up during software development. The tool helps reduce SQL information base investigating that too in few hours instead of days. It will allow developers to code quickly with the help of database automation and analysis tooling. Moreover, SQL Toolbelt has add-on extensions for Visual Studio and VS Code.

It is tough to evaluate the “good” code and the “bad” code in a group project. In such a scenario, SonarSource built up a set of guidelines that determines how your group’s code should resemble. SonarCube can be run on a self-facilitated server for code quality investigation and gives a hazard score for thorough analysis. The best feature is its capacity for dot net developers to consolidate their pull demand if it does not meet the code rules they had set up. Locally, dot net developers can utilize SonarLint to run against MSBuild in their Visual Studio. In the CI/CD pipeline case, the SonarCloud can run as a trigger for code quality before permitting your work to compile.

Automation is the Key for All .Net Developers

I hope you have understood the importance of these top automation tools. The tools are already deployed in various .net development companies, and different free-lancing dot net developers are also using the tools for managing the quickly emerging needs of clients.

If you have any other DevOps automation tool that I may have missed, share it in the comments below!